What’s this? Two physical therapy (PT) posts in a row? Has Val run out of non-PT-related stories? Nah, I just wanted to get this particular post in before I leave for Cambridge (the American one) and have to take a brief hiatus from my PT gym. Believe me, I’d love to move my gym to Cambridge or move my school to northern Jersey, but neither one of those options is possible (or so logic tells me). Anyway, before I leave, I wanted to talk about how I do standing exercises at Push to Walk, and provide lots of context to explain what I mean by “standing exercises.”

I remember when Eric LeGrand, a former NCAA football player who became paralyzed following a hit during a game, tweeted a picture of himself in a standing frame. He captioned it, “Standing tall, we can’t fall. Standing upright again,” with zero context to describe what he was doing (which is, standing upright with the support of an entire apparatus, which I had thought was apparent from the photo). The mediaverse jumped on it and declared it inspirational (because when it comes to spinal cord injuries, the media lacks a thesaurus). News outlets turned LeGrand’s tweet into a mass of misleading clickbait headlines that said LeGrand was standing in therapy. He was, technically, but the articles that followed the headlines were poorly informed about what the use of a standing frame actually meant.

The use of a standing frame is, undoubtedly, an accomplishment. When someone first becomes injured, particularly those with high level injuries (LeGrand is a C3-C4 level injury, just one vertebra down from where Christopher Reeve was injured), their ability to maintain their blood pressure becomes a major issue. The act of sitting up can result in dizziness and fainting. It took months for me to sit up without seeing dots in the morning, and I have to constantly fidget or stretch backwards in my own standing frame to keep my blood pressure up (although to be fair, my blood pressure has always been on the low side).

But the LeGrand picture taught me a lesson in social media – don’t post anything on your personal account without a good explanation of what you’re doing (although to be fair, the media probably would’ve taken anything that he posted out of context anyway).

I may have taken this lesson a tad too seriously, because I avoided posting anything related to PT anywhere on my Facebook, Twitter, or Instagram, with the exception of a planking video and last week’s sled hockey post, for the past eight and a half years. I’ve told Push to Walk (which has Facebook and Instagram accounts) that they are not allowed to tag me if I appear in any of their posts. And I’ve kept discussion of my physical therapy to such a minimum that when I told one of my professors that my summer plans included lots of physical therapy, he replied, “Ah, a little R&R?” At the time, I laughed and said, “Yup,” because I didn’t want to say, “Actually, this takes quite a bit of effort, and about a solid 20 hours of my week, but sure, let’s call it R&R.”

It’s not that I dislike talking about PT. Having been a cross-country runner, I enjoy doing and chatting about exercises that are both beneficial and slightly masochistic. But I can’t just upload a picture or a video to Facebook and say, “I did this in my workout today!” I have to explain what I’m doing. Otherwise, my friends and family might get the wrong idea.

But now that I have a blog, I can post PT pictures with explanations. If I wanted to, I could even describe what I’m doing in nauseatingly specific detail! But I won’t, because a number of you will probably stop reading. So I’ll just use reasonable-length explanations.

But first, there are numerous health benefits to standing. I say this because usually when the media depicts someone with a disability doing any sort of standing exercise, it’s to say that the person is doing PT with the sole intention of someday rejoining the able-bodied. People with disabilities have goals other than walking again (although it’s a solid long-term objective), and can all improve their health with standing exercises. I personally like being healthy.

That said, here is a picture from a workout from 2010:

What it looks like: I’m standing while keeping balance as the trainer steadies my hips and I hold onto a bar.

What I’m actually doing: First off, the trainer is blocking my knees with his knees. He is also holding my hips in place. This prevents me from falling, which is exactly what I would do if he let my knees or hips go. My hands are gripping the bar for balance purposes.

What this picture doesn’t tell you: My hip flexors are really tight from sitting in a wheelchair. The first time I tried to go from a seated position into standing, I nearly headbutted my trainer because I couldn’t stand up straight, even with his assistance. As humorous as it would be to headbutt my trainer, he really did not deserve to be headbutted (what is the past tense of headbutt?) on that particular day. Also, I was upright for about twenty seconds before my blood pressure began to drop, I started to see dots, my surroundings began to look green-ish, and I had to sit back down again.

Here is another picture from that same session:

What it looks like: I’m standing with less assistance!

What I’m actually doing: My trainer is still blocking my knees and holding my hips in place, and he told me to take my hands off of the bar so that I could work on my balance.

What this picture doesn’t tell you: This is a balance/core exercise where I happen to be in a standing position (meaning, standing with a heck of a lot of assistance). This did not last long either, because I had to sit down about thirty seconds later (darn blood pressure).

Note how stiff I am. This is because: 1. My blood pressure is dropping and I’m doing my best to not tell my trainer about this until it is absolutely necessary; 2. Tight hip flexors are making it difficult to maintain any semblance of decent posture; and 3. This position feels really hard to maintain and I’m not breathing as much as I should be.

Around that time, my standing sessions were hit or miss. I’d either be able to stay up for 5 minutes, or for 30 seconds. It was inconsistent, and my mom happened to take a picture of me on a good day.

Also, this is a great moment to introduce the quad belly, which is the name for that condition where someone with a C-level (or high T-level) spinal cord injury lacks the ability to suck in their gut. As a result, their belly looks like it’s sticking out. It’s unflattering, less than ideal for my blood pressure, and makes it difficult to go shopping for clothes (more on that in a later post).

Now let’s fast forward to a picture from a recent workout.

What it looks like I’m doing: Exactly what I’m doing from my 2010 picture (although with a different trainer who also deserves not to get headbutted on this particular day).

What I’m actually doing: Standing while my trainer blocks my knees and holds my hips in place. If he let go of either, I would fall (and neither one of us wants that).

What this doesn’t tell you: Turns out that the last six years (especially this past year, when I didn’t attend school) of core work has improved my blood pressure/standing tolerance. My hip flexors are looser. I can stay up for way longer than I could before. Boo-yah.

I don’t know how apparent the difference is through pictures alone, but I’ve noticed a change. 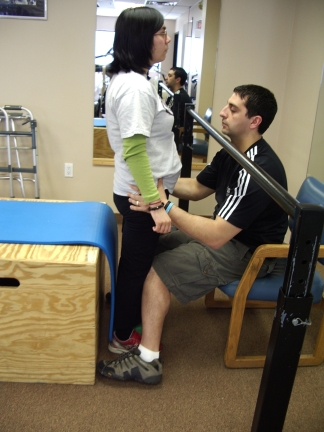 I held this for maybe ten seconds?

Here’s also a video from another recent workout (all sounds that seem random are probably from other people in the gym).

That’s right, we’ve moved beyond simply standing there and hoping that I don’t faint.

What it looks like: I’m lifting something up and down. The aide standing in front of me is spotting me in case I fall forward.

What I’m actually doing: I’m lifting a weighted bar up and down. My trainer is still blocking my knees and holding my hips in place (more so than he would be if I were just standing there). If you’re wondering why my trainer is bending forward so much, it’s because he doesn’t yet trust me to lift the bar without hitting him in the face, so he moves his head. Yeah, at this point, I wouldn’t trust me either.

What this video doesn’t tell you: Although this might look like an arm workout, this actually targets the core. Every time I lift the bar and place it back down, I am bracing my back (my ENTIRE back, whoo!), and some of my abs. Additionally, I have zero video proof of this, but the bar used to be way lower earlier this year.

Also, the quad belly has gone down slightly, so that’s pretty sweet. It would’ve gone down more if I hadn’t eaten baked goods everyday this past year, but baked goods are awesome and I regret nothing.

You may wonder whether I can feel my legs while I do these exercises. The short answer is yes, but the longer answer is that while my sensation is not 100% there yet, I can currently feel when my legs bear weight. I know when my joints are bending and my muscles are sore, but my control over their movement is non-existent to trace. There are days when I recover some new sensation, or some type of movement becomes easier, but every improvement is gradual. Just getting to a point where I can do standing balance exercises without feeling like I’m going to faint has taken a long time (probably longer than it would’ve if I hadn’t gone to college and graduate school, but I wanted degrees). Because my blood pressure, balance, and strength have improved so much, I’m able to do more standing and walking exercises (meaning walking with a lot of assistance – more on that in a later post).

All this is to say that this is where I am with my standing right now. I’ve still got a ways to go, but I’m happy to see some improvement. While pop culture portrayals of disability often depict individuals who recover overnight, or over the course of a montage, actual improvement takes weeks, months, years, and even decades. I offer my story as a boring, yet realistic, attempt at staying healthy and fighting the effects of paralysis. It seems dull, and some progress seems so slow that it appears nonexistent, but when I compare where I was in 2010 to now, I realize I’ve accomplished quite a bit.

One thought on “Standing with Context”

PhD candidate of medieval history at Princeton University. Also a dessert fanatic who happens to use a wheelchair.

San Francisco, day two! Afternoon tea at @crownandcrumpet and then an amazing s’mores treat from @dandelionchocolate at the Ferry Building.
San Francisco, day one! I’ve got a story highlight reel, but also figured I should make actual posts. Malasadas from @oceanmalasadaco and wine and spicy garlic cheese spread from @palmcitywines
When your sister visits with pre-Thanksgiving treats 😁 @tastecreme
I promise I will eventually try all of the @bibbleandsip cream puffs, but it’s so hard not to get the black sesame every single time.
Testing out the new oven with @khatzdubson by making chocolate chip cookies! 🍪
That moment when you realize that cinnamon buns are indeed the perfect breakfast food. @bourkestreetbakerynyc